What Is Solar Power Self-Consumption?

Why Aim For Solar Power Self-Consumption?

Off-setting an electricity bill with solar power is more valuable than exporting solar power to the grid, and this is why self-consumption is ideal.

Using solar power directly means eliminating the need to buy power from the grid, which is approximately 30¢ per kWh. If you were to export that power to the grid energy companies, you will be paid around 8¢/kWh for your power, which is not as valuable as using the power yourself (solar power self-consumption).

In a typical New Zealand household, most energy/power demand occurs at the start of the day (when people are having breakfast, getting ready for work) and at the end of the day (dinner is being made, lights and heaters are turned on). Power demand is shown as the purple line on the graph below. In contrast, the majority of solar power generation happens around the middle of the day, as seen in the yellow bell curve below. 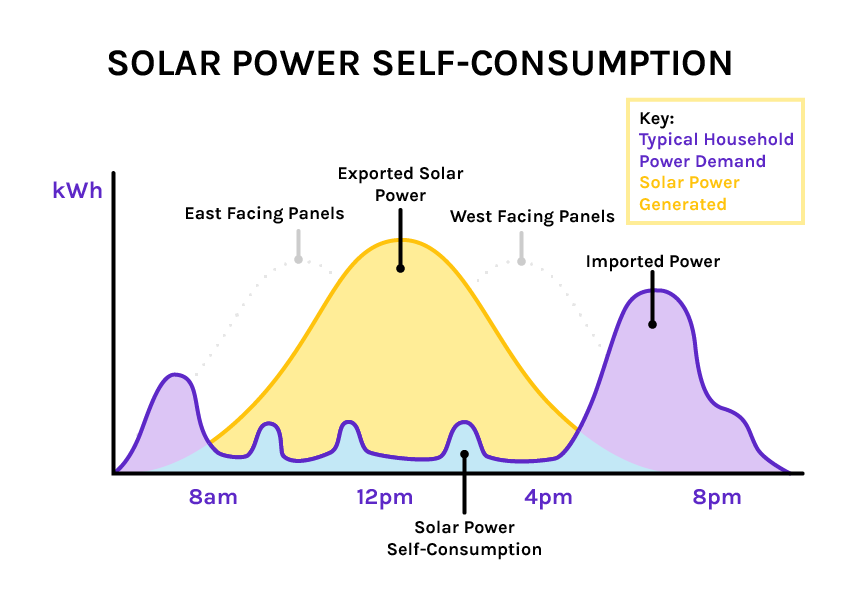 Typical energy use and solar generation shows very little self-consumption (shown in the light blue shading). It shows that peak power is being drawn from the grid in the morning, and evening, at the expensive energy retailer price of around 30¢/kWh (light purple shading). There is also a considerable amount of solar power being exported to the grid at the low rate of around 8¢/kWh (light yellow shading).

Self-consumption is a good goal to work towards; the graph below shows the benefits. 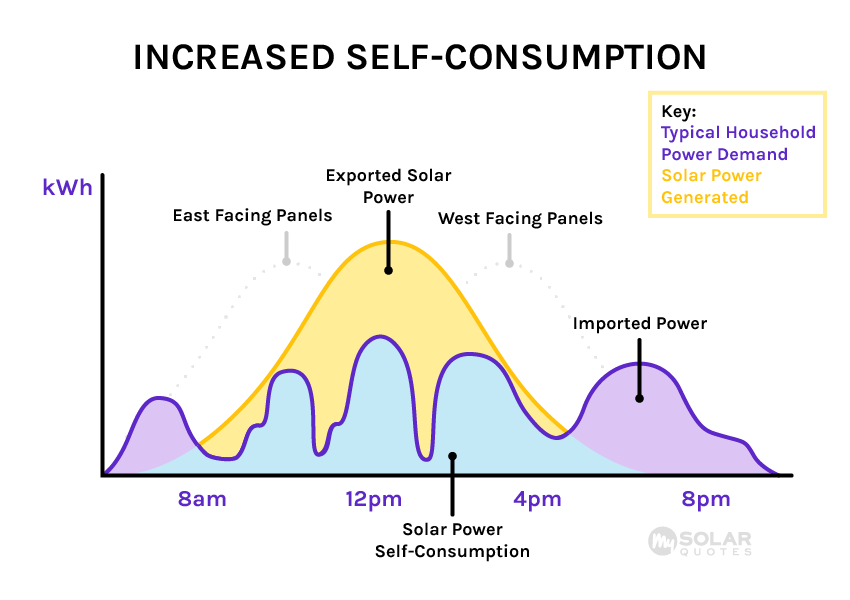 Because the daily power demands have shifted to the middle of the day, less power is used at night, which would save you money instead of buying electricity from an energy retailer.

How do you achieve solar self-consumption when you are at home during the day?

Solar self-consumption is easily achievable, especially if you are at home during the day. If you have monitoring on your solar system take note of when solar power is being produced and aim to turn on appliances at that time, i.e. the vacuuming, ironing, heating.

Charging electric vehicles is another great option to soak up that solar power. Nissan Leafs are available second hand starting around $9,500. Nissan Leafs come with wall chargers (as do most electric vehicles) so just plug it into the wall when the sun is out, and fill the battery up with solar goodness. Need a quick charge? Fast charging stations can now be purchased in New Zealand and can be installed in your garage easily. The Neuton Power Wallpod is an example of a popular model in NZ.

How do you achieve solar self-consumption when you're not home?

Technological advancements in recent years means automation can help to achieve higher solar power self-consumption, even when you're not around to save power yourself. Making use of appliances with delayed start times can help you use solar power directly; appliances such as dishwashers and washing machines are available to purchase with delayed start time functionality built-in.

If your appliances don't have delayed starts, plug in timers are a great option and come in a wide range of functionalities. The HPM Plug in Digial Timer can be brought from Bunnings at $14.75, allowing you to schedule your appliance to turn on and off at different times of the day for 7 days a week.

A solar diverter turns on your appliances when the suns out, even when you're not at home. The diverter is alerted as to when and how much solar power is being generated. A hot water cylinder is an example of an appliance that you would want to connect to a solar power diverter. This is because your cylinder can store hot water for extended periods of time, the cylinders element can be turned on at any time during the day. 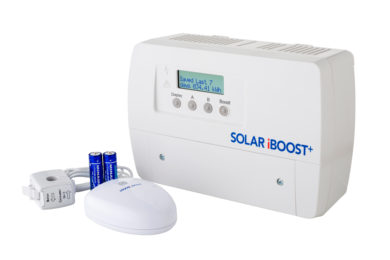 The Power Genius allows appliances to be controlled through a wireless network (the hardware is either plugged in or hardwired), and there's virtually no limit to the number of appliances you can control and monitor. The retail price starts at $650 for monitoring and from $1100 for the appliance controller. If you have a 3kW system or larger it will add $500 to $600 value each year for a 3kW system, a great money saver.

Increasing solar power self-consumption by storing power in batteries is becoming the new normal. Stored solar power can be used any time of the day or night.

Batteries systems are expensive, but battery storage technology is improving and becoming more affordable. Its one of the most rapidly developing technologies on the planet!

If you choose to purchase a grid connect system, and if batteries are not in your budget, you can easily add batteries to your system in the future.

Below is Enphase's "AC Battery". It is a modular system that is stackable, making power storage easy, and efficient. 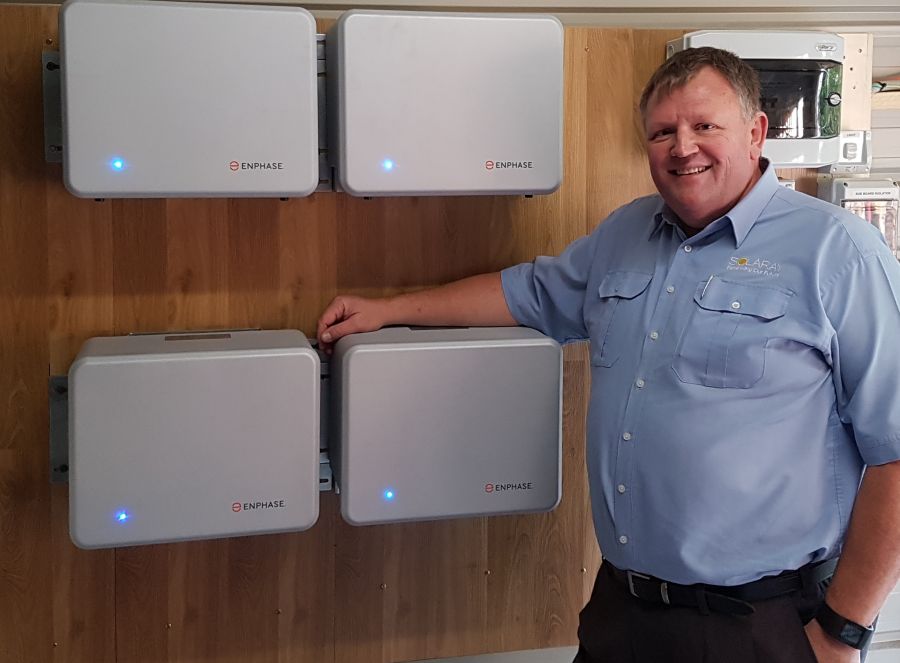 Below is Tesla's Powerwall 2, which has limited availability in New Zealand. Tesla are one of the solar industry's biggest innovators, they are renowned for their quality and hi specs.

Finally SMA's new innovation is their Sunny Boy Smart Energy system.  A complete inverter and battery storage in one unit.

Installing solar panels on east and west facing roofs means a flatter, and wider bell curve. Below is what the self-consumption graph will look like with both east and west facing solar panels (this is without any appliance controllers or batteries). In this case, the amount of power used directly has increased, and imported power has decreased. If you live in the typical NZ household, (using lot of power first thing in the morning and in the evening), then this particular arrangement is a good option to consider. 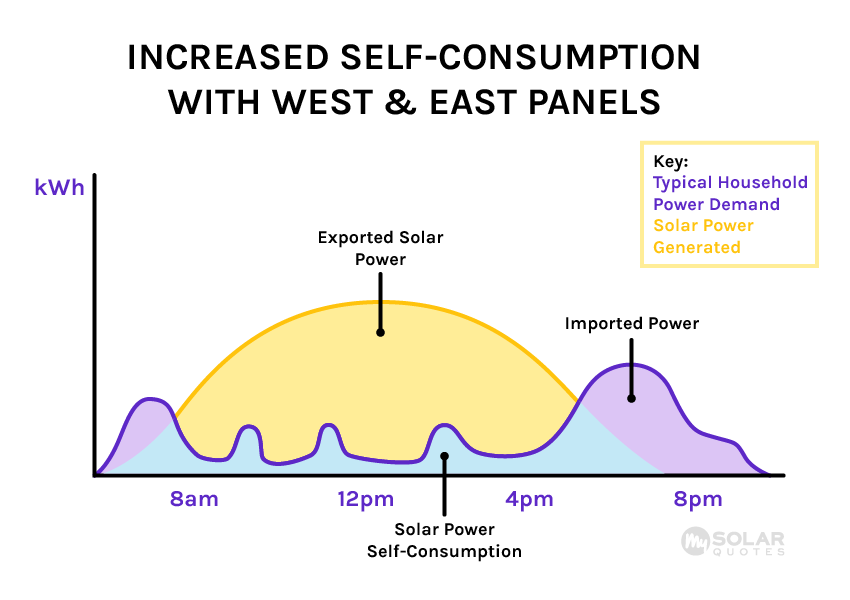 The Price of a Solar Power System