The average household uses electricity first thing in the morning and in the evening hours. Power consumption is typically low during the middle of the day when solar power generation is at its peak, which is not ideal when trying to maximise the benefits of the solar power system.  Changing power consumption patterns isn't always practical, making battery storage a great solution to enable a high amount of solar power consumption within the home.

Due to falling prices, along with continuous improvements in technology, solar-powered battery storage systems (a.k.a. solar battery banks) are becoming increasingly popular in New Zealand. Approximately one-third of all new solar installations in New Zealand have batteries included in the system.

Lithium-ion type batteries are the most common technology used for solar storage. Tesla Powerwall is one of the big names that is leading the charge in the solar battery marketplace.

Prioritised for maximum efficiency, solar power is sent to where it is needed most.

Why Are Solar Batteries Useful?

Batteries are highly recommended if there is too much solar power exported to the grid during peak power production hours. Solar batteries function by taking excess solar electricity (shown in the yellow bell shaped curve) and storing the electricity in batteries, allowing the user to consume power whenever they like. More often than not, the stored solar energy is used at night when the sun’s not shining. 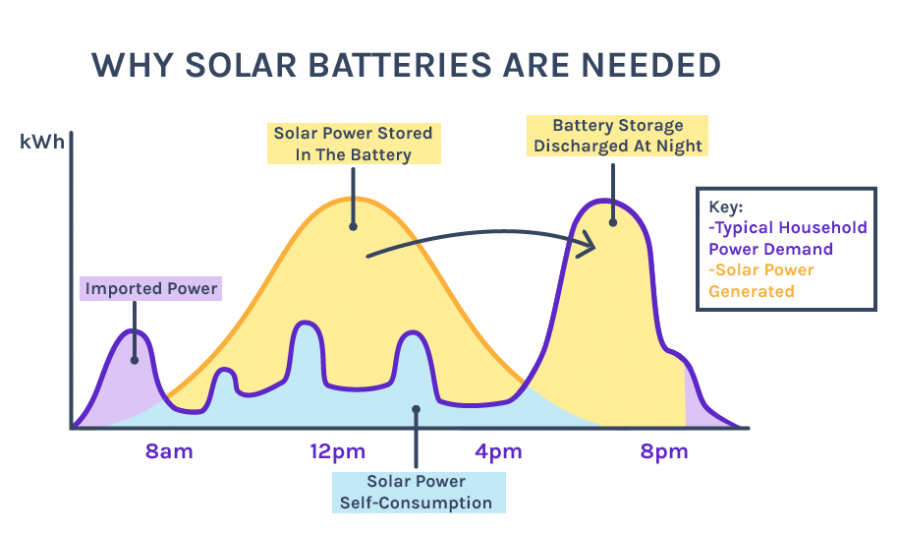 What Is The Price Of Solar Batteries?

The price range for solar batteries is roughly $6,000 to $20,000 NZD.  Typically the more storage a battery has, the more it will cost.  Other factors that affect the price are the capabilities of the battery, quality of the battery, chemistry used and how long it’s expected to last.

Here’s a quick rundown of  some of the products available on the market along with their estimated price:

Please note these prices are rough estimates.  For accurate quotes, fill in our quote request form here for 3 free quotes.

Solar batteries can be set to power appliances when there is a blackout, or during a power outage. Note: not all batteries offer this feature, be sure to ask when making a purchase.

Will Solar Power Still Be Exported To The Grid If Solar Batteries Are Installed?

Because such low rates are paid for exported solar power (roughly 8-12 cents per kWh), sending power to the grid is the last priority for the solar power system. 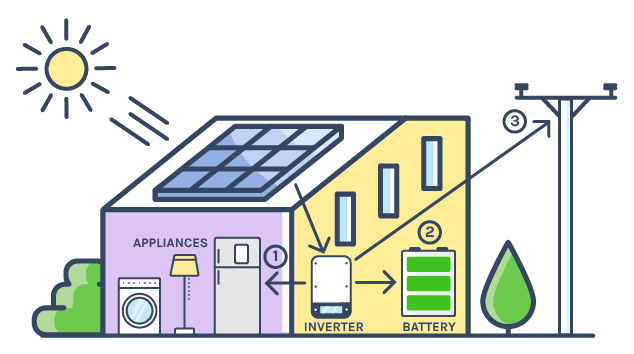 A solar battery allows homes and businesses to store excess solar electricity and use it when it’s needed most.  Here’s a shortlist of why this is a good thing:

Read more about the benefits of solar battery storage here?

Should You Install Solar Batteries In Your Home?

For Power Security - Yes!  If you are sick of power outages, or the idea of not having power for a day makes you nervous, then absolutely, solar batteries can be sure to provide a home or business with power during a blackout.
For Financial Return - Maybe not quite yet.  A solar battery is likely to reduce a solar power systems return on investment and lengthen the payback period.
To Reduce Power Bills - Yes!  A battery will reduce those pesky power bills on top of the savings already made with a solar power system.

Lithium-ion batteries are found in mobile phones, laptops and electric vehicles - increased demand for these products has prioritised economies of scale for lithium-ion, with the cost dropping roughly 20% each year.

Fear not, savvy and smart early adopters of solar technology. Existing grid-connected solar power systems can be retrofitted to include a solar battery bank.

Having a battery ready system is an excellent option if a user is considering adding solar storage at a later date.