By Kristy Hoare on 7th May 2013 in International Solar 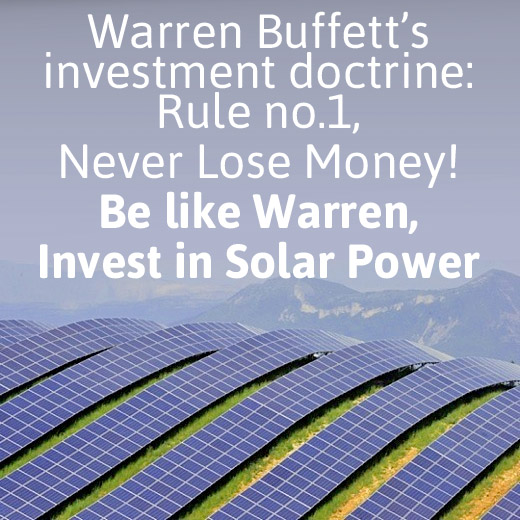 The most successful investor of the 20th Century, Warren Buffet sees solar power as a good investment.  A new company of his called MidAmerican Renewablabes entered the market in 2012, backed by the parent company Berkshire Hathaway's MidAmerican Energy Holdings Company, which have US $11.2 billion in annual revenue and $48 billion in assets.  MidAmerican Renewables has quickly grown from a non-existent player in the solar power producing market to acquiring some of the worlds largest solar projects.

So why has Buffett entered into the solar market?  Some have speculated that given Buffett's alliance with Obama, MidAmerica might be getting into renewables to boost the US President's green image. Particularly after Solyndra went bankrupt after receiving $535 million from the US Energy Deparment loan guarantee.  But as Buffett's famous quote goes "Rule number one is never lose money. Rule number two is never forget rule number one."  While there might be beneficial political overtones, financial analytics make it a worth while investment.

Paul Caudill, president of MidAmerican Renewables solar division explained "we see solar and wind assets as very, very solid long-term investments".  A lot of the risk is mitigated by long-term power purchase agreements with power utilities, which the utilities have agreed to buying the power that the solar photovoltaic projects make.  Caudill said "the power purchase agreements provide us comfort. We are a long-term investors, so we like to have counterparties that have the same goals that we do."

MidAmerican knows the energy market well, and as Caudill explains, right now gas prices are at "very, very low" levels.  He goes onto saying that "you can almost be assured energy prices will rise, when I say energy price I'm talking about electricity prices to consumers".  So with electricity prices rising and the price of solar components as low as they are right now, it makes investments into solar very attractive.

Caudill also sees the future of solar shifting towards smaller scale solar projects and away from large scale like the first three solar project MidAmerica Renewables brought.  This is due to land being unavailable.  He said he sees there being "very exciting opportunities in the 20 MW-40 MW range".  Caudill is planning on growing the solar photovoltaic sector of MidAmerican Renewables at a "managed pace".

When one of Buffetts companies aggressively expand in an industry, other investors take notice.  I think New Zealand can benefit from following in Buffett's lead while there is a good balance of relative low risk and low cost, it's not too early and it's not too late.