By Kristy Hoare on 13th April 2015 in New Solar Technology 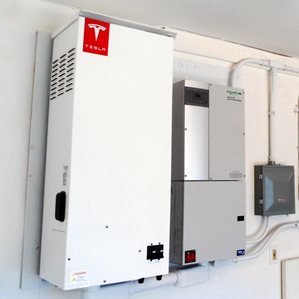 The motivation to add batteries to a solar power system is now higher than ever. Governments around the world are lowering their feed-in tariffs and in New Zealand the energy retailers are lowering their solar power buy back rate to a rate so low its almost not worth while exporting solar power to the grid. The possibility of home battery storage being a common household appliance is just around the corner!

In the past adding batteries to a solar power system has been uneconomical for most people, apart from those who are rural and not connected to the grid. But as the solar industry now has a higher demand for batteries in combination with battery technology improving, the cost of battery storage is being driven down.

The price of batteries has been declining steadily, around 10% to 15% each year.

According to CleanTechnica, approximately 15,000 German households now use batteries to store their solar power, and that number is snowballing since the costs have come down.

One of the biggest announcements in the last month has been from Elon Musk from Tesla, announcing that they will be making home battery storage systems for people to use in their houses or businesses. The design is complete and the manufacturing will start in around 5 months at the Nevada Gigafactory.  Read more about Tesla Powerwall here.

Will this encourage people to go completely off the grid?

To go completely off the grid means that you are always limited to the amount of power you can use. What happens if you have your entire extended family over for Christmas - being off the grid means you don't have the luxury of topping up for those types of occasions.

When you go off the grid you have to make sure you have enough solar panels on your roof and a big enough battery bank to cater for the coldest, darkest period of the year. Then for the rest of the year the system is basically oversized.

It makes more sense for households to be connected to the grid and have a solar panel system and battery bank that will decrease their dependence on the grid, but not eliminate it.

As of June 2018 Tesla power wall batteries were being supplied but not meeting the demand and a backlog of 6 months can be expected by most suppliers.

A fantastic product for minimising export of excess solar is available here in NZ. The Power Genius is developed locally and has a worldwide patent, so the backers have full confidence in this being a significant element of domestic solar installations. The biggest win using Power Genius is its ability to control the hot water cylinder, effectively utilising the cylinder as energy storage. Smarts in the product mean it dynamically controls the load and in the event household load exceeds the solar input the HW cylinder is cut back until the load reduces again. For example, boiling the jug. This ensures free solar power is used to the max and export is minimised. Typical installations that are exporting 40-50% of the solar reduce to <10% export with the unit. Worth investigating as the ROI for me is >10%. Thrown out the inefficient gas califont and installed electric hot water instead has been an excellent move for us

Hi Kristy - FYI I am a Meridian customer who has a Vector solar system from the initial Pilot. Meridian has so reduced the price on what they pay us for our solar energy that our daily objective is to ensure that we use as much of our generation as possible because it just isn't worth it. We were paid 25cents a KWh when we started our solar journey only to have it reduce to 7 cents in the summer and 10 cents in the winter. Vector generously maintained the price until February this year.

What area do you live in? It won't be Meridian who will put on a solar tax as they are an energy retailer, it will be your local lines company, for example in Auckland the lines company is Vector.

There are several lines companies that I would consider are pro solar and wouldn't introduce a tax. Vector is pro-solar as they sell solar power systems, so I would say Aucklanders are fairly safe.

I have a write up about salt water batteries and Aquaion here: https://mysolarquotes.co.nz/blog/new-solar-technology/sodium-ion-batteries-game-changers

Installed 16 panels with a 3.8kW inverter in Oct 2012. Great, until Meridian decided to claw back on pay back. Would like to look at storage, maybe go off grid for when Meridian do the same as the east coast power supply outfit is doing. What is the take on the Aquaion saltwater batteries?

Cute that the government sold off 49% of the energy companies in New Zealand. Obviously their information warned them of the coming changes to Solar production in the homes of New Zealand.

There is some more up to date information on this page: https://www.mysolarquotes.co.nz/blog/new-solar-technology/tesla-s-new-powerwall-battery---q-a-s

Any new information on Tesla batteries?

i want to go off the grid

Hi Kristy ,
Kyocera Germany is launching a home storage unit in May. Roll on inexpensive home storage , looking forward to seeing what the price is.