By Kristy Hoare on 24th April 2015 in Renewable Energy 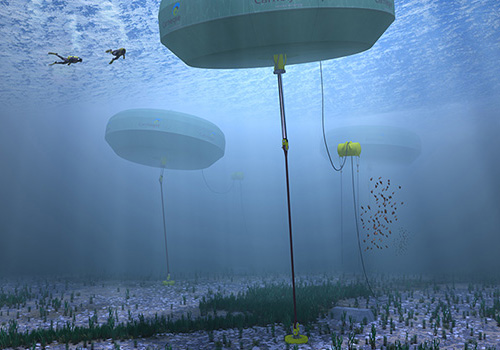 Submerged in the roiling seas off the coast of Perth in Western Australia is the world's first commercial-scale wave energy system. After ten years of research and construction The Carnegie Perth Wave Energy Project has recently rolled out its multi-million dollar wave energy system, capable of generating significant power for the electric grid on land and simultaneously desalinating water. As my American friend would say: this is a really big deal.

The wave energy system, lovingly titled CETO 5, functions by an array of submerged 240-kilowatt buoys, tethered to the seabed via hydraulic water pumps, that move in-sync with the waves while pushing pressurized water through power turbines and simultaneously feeding a desalination water system. Quite an amazing process! As Carnegie Wave Energy CEO Michael Ottaviano told The West Australian: "This technology can operate in a variety of water depths, swell directions and seafloor conditions and can generate power for both onshore and offshore consumption, it's a very reliable energy source," he said. The project will sell the resulting electric power and freshwater to the Australian Department of Defense to supply Australia's largest naval base, situated on Garden Island off the south coast of Perth. The CETO 5 was installed off Garden Island in late 2014 and activated in February of this year. Unlike other wave energy devices, the CETO 5 lives entirely beneath the water's surface, protecting the equipment from damage and immersing it into the constant ebb and flow of the ocean.

Plans are already underway for a sixth system, which should generate four times the power of the CETO 5, which can provide enough energy to power the equivalent of between 1,500 to 2,000 households! Energy technology advancement such as this represents, to me, a true look into the future. Wave technology, along with wind and solar, are reliable, renewable sources that will help heal our ailing planet while weaning us off coal and oil. I hope all three, waves, wind, and solar, continue to make waves, pun intended, in the international community, garnering attention to such a worthy investment in our future.