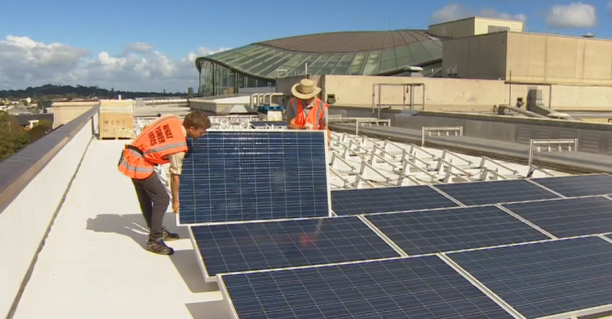 The Auckland War Memorial Museum is aiming to reduce their carbon footprint and help kiwis and visitors to New Zealand learn about the benefits of solar power.  Not only is this a sustainable step forward for the museum, but it's also going to save a lot of money on power bills.

Using Enphase M215 micro inverters on this project allowed for a much simpler system design and for minimal impact on the 85-year-old building.

The system uses Renesola JC260M solar panels that are positioned in a landscape orientation so they can be tilted up to better capture the sun, all the while having a lower profile, hidden from view from the street.

Currently most solar panels are drilled onto a roof, but to avoid damaging the iconic building the solar panels are being held down by weights, which are engineered to withstand 200km/h winds. This is to ensure safety of the panels from New Zealand's harsh climate.

A large 9-screen TV display is planned to go inside of the museum where visitors can see the performance of the system.  People will also be able to go online to monitor the amount of power the system is generating.

The Auckland War Memorial's venture into solar power will be a fantastic showcase for solar power technology in New Zealand. This will undoubtedly be an excellent education tool to help the public and visitors to New Zealand in understanding and appreciating just how a solar power system works, and discovering all the benefits this exciting technology can bring.

Hi Peter,
The weight from solar panels would be 11kg per meter square. Sorry I am not sure about the weight of the anchors. The framing looks to be aluminium, which is relatively light weight. I haven't seen any literature about solar panels having an effect on inside temperature. I would say it would have a minimal effect.

How much extra weight per square metre was added by panels and the anchors? And are there benefits for temperature control inside the building from the presence of panels?