The Rise of Grid-Scale Battery Projects in New Zealand 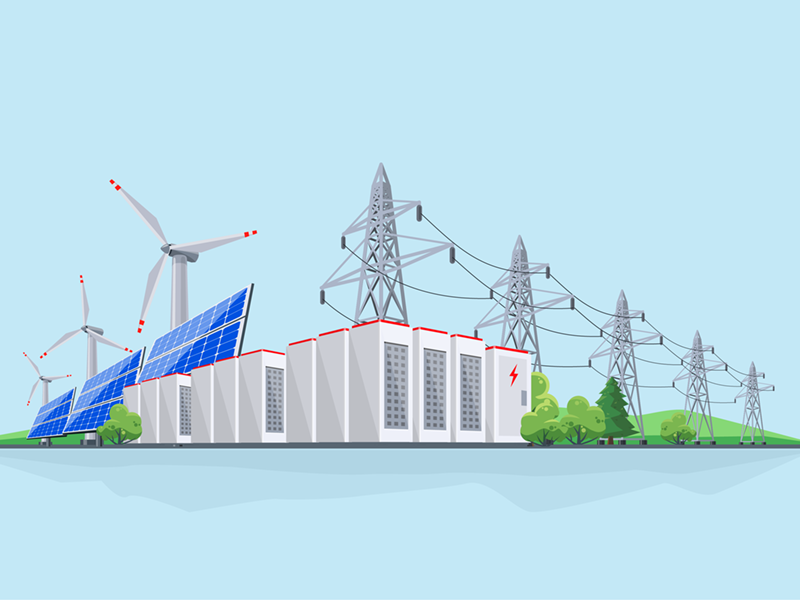 Batteries are one of the most underrated technologies in modern times. From cars to remote controls and home backup systems to smartphones, our life is literally at the mercy of batteries. In the context of renewable energy, batteries seem to be even more inevitable. For instance, energy can be stored in the form of a full tank of petrol, but it is slightly more difficult to store solar energy in a tank for consumption during darker hours.

This issue seems starker on a larger, grid-scale, where on one hand we have ambitious targets of going net-zero and fully renewable, but on the other hand, the intermittency of solar and wind poses a hurdle toward those goals. Grid-scale battery storage systems promise to solve this problem, and a few more, by providing the much-needed flexibility that renewable power plants alone cannot.

As a result, worldwide as well as in New Zealand, more and more large-scale Battery Energy Storage Systems (BESS) are announcing their arrivals. Let’s take a look at a few examples:

Hamilton’s electricity veteran WEL is coming together with Wellington’s multiple award-winning renewable energy company Infratec, to install a 35 MW BESS in Waikato. Through this plant, the companies aim to support NZ’s journey towards the goal of 100% renewable by 2030.

The unit will be able to store energy from a range of renewable sources including wind and solar, and is expected to be commissioned by the end of 2022. It will strengthen the reliability of power supply for Waikato customers, while also helping to correct supply and demand imbalances. The project will also be capable of providing fast reserve support for the North Island grid at times of high demand.

WEL’s BESS will cost $25 million and will be able to store enough energy to power up to 2,000 kiwi homes. Infratec claims that they are using state-of-the-art technology for this project and the batteries will have an admirable 20-year lifespan.

Recently, Meridian Energy purchased a striking 105 hectares of land to set up a utility-scale solar plant and a 100 MW battery storage system. It is somewhat poetic that the land in question is situated near the Marsden Point oil refinery.

The renewable energy park is expected to go online by mid-2023, and will likely be New Zealand’s largest-ever grid-scale battery farm. It will help improve the stability of the national grid, reduce the chance of network outages and allow more electricity to flow north from South Island generators. Even the solar farm in the project will be gigantic - with the ability to power a whopping 15,000 homes.

Non-wire alternatives, as the name suggests, are electricity investments that don’t spend ridiculous amounts of money on the transmission infrastructure. For instance, building a solar power plant in a remote community is far cheaper than building a transmission line from a coal-fired plant that’s hundreds of km away.

Other examples of NWA include distributed generation, energy storage, demand-side management, demand response, and digital network software and controls. These installations defer or replace the need for specific equipment upgrades, such as lines, cables or transformers, by reducing load at a substation or circuit level.

Additionally, these solutions can redistribute electricity demand throughout the day and night. This eliminates the need to replace or upgrade existing infrastructure with growing demand. NWA solutions can often defer multi-million dollar investments, leading to lower pricing for end customers.

The Registrations of Interest (ROI) seeked by Vector are for the wider Warkworth region, and will certainly have proposals for BESS. These NWA investments will, according to Vector, improve access to the region considerably. These investments are necessary since the extension of the Northern motorway will open up new land for development. Owing to this, the number of customers Vector will serve is forecast to grow from 16,000 at present to 25,000 over the next 30 years - a solid reason to invest in NWAs!

Transpower cites the need for the NWAs to be voltage support. A voltage support device/plant is nothing but an ancillary unit that supplies power wth a certain voltage to maintain the grid voltage in that location. Providers of a non-transmission solution may also be able to utilise it to meet peak demand and provide added resources for the reserve market. These can, and will, include battery storage systems.

Transpower’s RFP was triggered way back in 2012 when the decommissioning of thermal plants in the region began. Transpower’s GM of Grid Development John Clarke was quoted saying, “the 2020 RFP identified that emerging technologies, such as grid-scale batteries, could also meet the need in future.” The company aims to have a solution in place by 2026.

While these are some of the most important examples of upcoming BESS projects in Aotearoa, there are multiple other grid-scale battery projects in consideration. For instance, Contact Energy are investigating the economics of a 100 MW battery energy storage system and may have a decision this year.

Are Utility-Scale Battery Systems the Next Big Thing?

Originally thought of as mere storage devices, battery storage systems have proven to be so much more than that. They can help access multiple value streams. Let us list out some of those here:

Nearly every country, state, and organization has a target for emission reductions. While renewable energies are usually the best and often the only solution, their intermittency is an important hurdle. Grid-scale battery storage solves this problem, enabling the use of renewable plants for large sets of consumers.

Renewables or not, a BESS can help run a grid smoothly. It does this by frequency regulation, voltage support, flexible ramping, and black start services.

As discussed before, battery systems can help defer large investments of electricity infrastructure by allowing for energy to be produced, stored and consumed locally.

According to the IEA, installations of utility-scale batteries have jumped by a remarkable 50% worldwide last year. The drivers of this change are the globally accelerated adoption of renewables, as well as the fall in battery costs. Ultimately, it does not feel surprising to imagine a future where every town, village and city in NZ and in the world is equipped with one or more grid-scale battery storage systems.