By Kristy Hoare on 11th September 2014 in Electric Vehicles 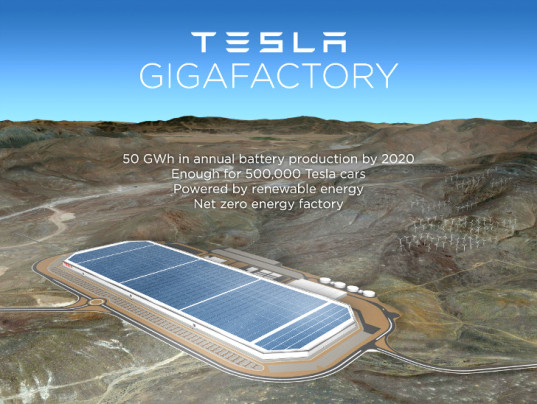 Greetings fellow solar enthusiasts! I have some interesting global energy news to share. On Sept. 4th, Elon Musk, co-founder and CEO of Tesla Motors Inc. announced during a news conference in Carson City, Nevada, that Tesla will build the world's largest lithium-ion battery plant in Nevada, bringing a $100 billion boost to the state's economy over two decades.

Tesla Motors' new $5 billion "Gigafactory" will be powered by wind, solar, and geothermal systems, and run at net zero energy, which is pretty radical from where I'm sitting. By being "net zero" the factory won't have to be off-grid, but has pledged that it will be powered by renewables. Tesla's Gigafactory not only sets a new precedent for factories worldwide, but also represents the first steps toward Tesla's goal of mass-market electric car sales.

Musk intends to accelerate production of electric Tesla cars from about 35,000 units this year to hundreds of thousands annually in the next few years. To do that, his goal is to drive down lithium-ion cell production costs as much as 30 percent. Musk ultimately believes 200 Gigafactories would be needed to convert all the world's cars to electric. I'm beaming at my desk as I write this because it's so satisfying to know renewables like solar power will play a significant role in Tesla's endeavors.

The new design for the Gigafactory features a roof covered in solar panels, while a wind farm sits off to one side of the diamond-shaped structure, which is extremely space efficient, according to engineers. "It's a factory, but we care about aesthetics. Does it look good? Does it fit in with the rest of the environment?" Musk said. A diamond will have less impact on its surroundings, Musk said. "If you make it a box shape, you'd have to move a lot more earth." You go, Elon Musk! Don't disrupt the environment!

The economic impact of the project on Nevada will be huge. As Nevada's Governor Sandoval stated: "This is great news for Nevada. Tesla will build the world's largest and most advanced battery factory in Nevada which means nearly one hundred billion dollars in economic impact to the Silver State over the next twenty years." The factory is anticipated to directly create 6,500 jobs and a further 16,000 jobs indirectly, which would increase state employment by two percent and regional employment by over 10 percent.

Now, fellow Kiwis, think about how this could impact New Zealand. We already have a reputation as a self-sustaining, renewable energy minded country, so it makes sense that we become the first global citizens to all drive 100% electric vehicles. I'd truly love to see New Zealand at the foreground of humanity's push against our addiction to grid power and non-renewable resources. So, recycle those plastic bottles! Install a solar panel or two! And keep on the lookout for how we can get a Gigafactory of our own!