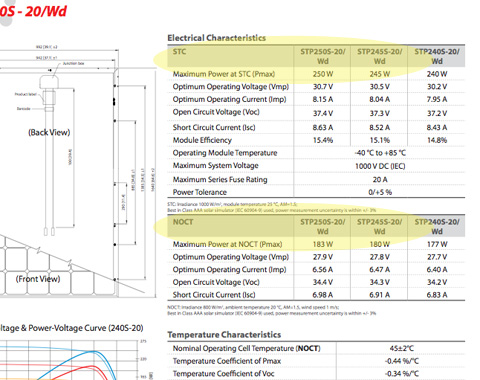 It's hard to believe, but this is the manufacturers core piece of marketing that aims to convince you that you should buy their panels.  Apart from comparing which data sheet has the prettiest picture, for someone like me without an electrical background it's meaningless.

Recently, I worked out what some of it means which I would like to share with you.

When the solar power installers talk about what panels you could go with, they commonly talk about a 190W or 250W panel or somewhere in between.  This number refers to the maximum power rating of the panels under Standard Test Conditions (STC) which is the equivalent of a strong sun (measured as Irradiance of 1000W/m2), while the solar panels are at a temperature of 25°C.

STC is very unlikely to ever occur because solar panels on your roof are generally going to be 20°C hotter than the ambient temperature.  When do you ever get a blaring sun when it's only 5°C outside?

Therefore the manufacturers have been kind to us and given us a Nominal Operating Cell Temperature (NOCT) rating, which means Irradiance: 800W/m2, ambient temperature: 20°C and a wind speed of 1 m/s, which is a much more realistic scenario.

Below is a screen shot of a solar panel data sheet showing the STC max power rating (250W) and NOCT rating (183W). 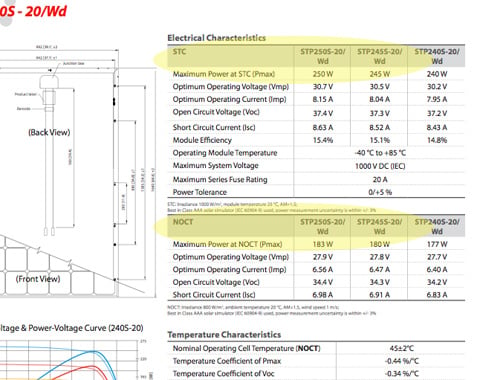 Most data sheets now have the maximum power at NOCT given to you.  Some of the older ones don't.  Interestingly two different brands of panels might have the same STC max. power rating, but then one will perform better under the NOCT max power rating.

Hi Prakash, no you can keep your normal home appliances. The inverter will convert the dc power created from the solar panels into ac power that can be used by all regular appliances in the home.

Do we need to change electrical devices when solar is used eg refrigerator or hot water tank when solar energy is used.?k

Thank's Kristy for your explaination as I'm a green horn on solar power and I am reading and taking in as much as I can before I make my mind up what to go for.Cheers Jeff.