Learnings from the solar industry in Hawaii

By Kristy Hoare on 30th September 2012 in International Solar 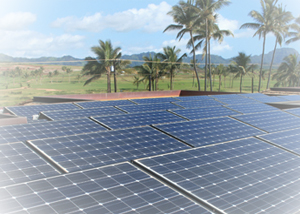 The island paradise that is Hawaii is an isolated and technically savvy state of America. With rising electricity bills and the high cost of getting oil to the islands (imported oil is responsible for 83% of electricity generation), Hawaii is taking advantage of solar power, though with this surge of solar photovoltaic power installations taking over the state, unexpected hurdles have arisen.

Solar power in Hawaii is unsubsidized, yet surprisingly it is still cheaper than grid supplied electricity. With the consumers of electricity quickly becoming aware of the fact that they can supply their own electricity to their business's and residential homes it would seem it is just a race against time until the islands are completely self reliant for electricity generation. But, as with any country that has to get through bureaucratic red tape, the local government is struggling to keep up with the demand of high price electrical upgrades and the permits required to be processed for homes and businesses to be allowed to install solar power grids.

Not surprising, utilities in Hawaii are reluctant to give you their dominance in the market.  The utilities set up a rule that only 15% of grid capacity can be solar power interconnections.  Recently solar advocates managed to get the limit up to 25%, but the still figure still doesn't allow solar power to reach it's full potential in the state.

In New Zealand the restrictions aren't as severe.  Any one wanting to connect a solar power system to the grid can, as long as it is under the size of 10kW.  If it is larger than 10kW the process can be variable.  Those connecting a system under 10kW are likely to face council consent fees with the required waiting period and local lines connection fees.  Until recently, most lines companies did not charge a fee to those wanting to connect a solar power system to the grid, but now we are starting to see more of these companies come up with a figure around $300 for administration costs.  Without Government regulation the utility companies are likely to influence the solar power market in New Zealand.  At present the national party has no interest in legislating the solar power industry.  The green party has a policy that requires energy retailers such as Contact or Trust Power to buy or generate a proportion of their sales from renewable power sources.

If New Zealand can learn anything from Hawaii it is that a free solar power market does not work and Government will need to step in if it wants to do right by it's country and allow solar photovoltaic power to become a major power source.