By Kristy Hoare on 17th June 2015 in New Solar Technology 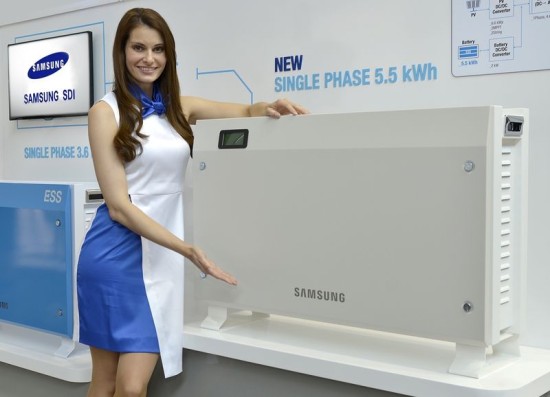 Since Tesla released the details of their lithium-ion Powerwall, the race has been on for other companies to release their home battery storage concepts.  Mercedes, Enphase and now Samsung have a solution to help solar PV home owners to reach higher solar power self-consumption.

Samsung unveiled two residential energy storage systems (5.5kWh and 8.0kWh) at the Intersolar Europe 2015 event in Munich, Germany.  The also announced that a 3.4kW system was being designed, which would help satisfy the market.

Samsung offers more than what the Powerwall does, as the enclosure includes a lithium-ion battery, solar PV inverter and a battery PCS (power conditioning system).  This system will allow DC power direct from the solar panels to be stored as DC power without converting it to AC power on the way through, meaning there will be less power loss.  It will also deliver higher performance due to the fact that all components in the system have been design together and optimised accordingly.

Another point of difference is that it sit's on the ground rather than being mounted to the wall, which may appeal to some homeowners.

There is a product warranty for 5 years and a performance guarantee for 10, which gives us an indication of how long the system is expected to last for.

I haven't yet seen the price for the Samsung home energy storage systems, so stay tuned.