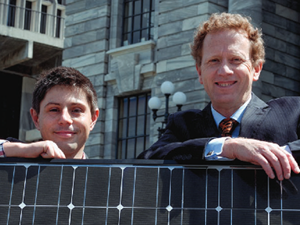 Could the time for free energy for New Zealanders be drawing closer?

The recent solar power policy annoucement by the Green Party in New Zealand is an initiative that proposes, should the Greens get enough votes in the coming election, to provide New Zealanders with an alternative to the current power systems that are available in our fair country.

Russel Norman, co-leader of the Green Party, speaks of the many benefits of utilising solar power systems on New Zealand homes. Such benefits include reducing the use of fossil fuels for energy, reducing costs of energy to households and providing jobs for New Zealanders and therefore promoting economic development through the use of clean and truly green energy. Mr Norman specifically mentions in his recent discussion on solar power the target of 30,000 solar power installations within three years. This sounds like a fantastic plan to anyone who backs the solar power industry, or anyone who just enjoys clean energy - but what /are the nuts and bolts of the plan, and who is paying for it?

The Green's wish to provide low cost 15-year loans to families that will cover the cost of installations of the solar power systems installed by approved suppliers and installers.  The loans would use the Crown's low sovereign interest rate, currently sitting at 4.1%. By the Crown loaning the cash to households for the initial set up the homeowner will then repay this debt through rates, though the debt is connected to the house, not the homeowner. After 15 years, the homeowner will own the system outright and can sell excess energy back to the grid, thereby earning money! The cost to the crown is minimal, with Mr Norman stating the cost will be neutral, with less than a million dollars a year in administration costs to the Energy Efficiency and Conservation Authority.

The new proposal also fits in with their buy-back policy, whereby the solar power that is exported to the grid is guaranteed a fair price which electricity retails pay homeowners for their excess solar power.

The purpose, or hope, is that by installing the initial 30,000 systems the sustainable electricity that solar power provides will save the average consumer thousands of dollars while providing the household with clean, sustainable energy that also comes with lower infrastructure costs.

This proposal for a cleaner and cheaper energy source from the Green's is promising and intriguing, but the response from the current government to these suggested alternatives to traditional and old fashioned energy resources has been met with confusion and denial of the positives such a roll out could bring.

Current PM John Key is placing emphasis on the cost of initial solar power set up, refusing to see the long-term benefit and overall low cost that is spread over the lifetime of a solar power system. Given that after a ten year pay back period your power will be free, and possibly making you money, the standpoint the government is taking is not only outdated, but seems to be in line with the large centralised power companies that seek to squeeze every possible dollar out of the New Zealand public. And why should we expect anything less when the current government is heavily invested in companies such as Meridian, Genesis and Mighty River. No argument for a cleaner and greener future will stand up against a Government that relies so heavily on current power companies profiteering to help run election campaigns.

Surely a major selling point of the solar industry is the reduction in New Zealand's current contribution to global warming via the fossil fuels that we are using. Solar power is clean and green, and ultimately inexpensive. Unfortunately, we have long missed the boat in being world leaders at the forefront of the solar power and clean energy revolution, but if we don't take heed to other nations that have, we will be branded old fashioned and irresponsible. The time to rethink how we power on as a country is now.