By Kristy Hoare on 24th June 2014 in Solar Power Trends Most businesses consume a hefty amount of power during the daytime/work hours, all the more reason for them to go solar.  Solar panels have been getting significantly cheaper in the last few years and thus driven commercial establishments to put up solar panels on empty real estate, i.e. their roofs, or anywhere else they can find!

Installing a 10kW solar power system (42 panels) would guarantee you an ROI (return of investment) of around 10% to 15%. With the price of electricity ever increasing a company who invests in solar would have its initial investment recouped in just 8 to 12 years -- while enjoying the luxury of free power for the remaining lifetime of the solar power system. Larger solar power systems would be paid back even quicker.

A large 30kW solar power system has just gone up in my humble hometown of Lower Hutt, Wellington.  The Black Diamond Technology office has placed a solar power system on the northeast section of their sloping roof. Interestingly enough, the solar panels they used were of course their own brands -- the 260W Black Diamond solar panels. For training purposes however, they chose to use two Enasolar inverter, which are made in New Zealand and two SMA inverters that are made in Germany.

Black Diamond Technology estimates that they will consume 90%-95% of the solar energy generated from their roof, especially since it coincides with their peak energy demand. Solar energy generated during the weekends would be exported back to the grid. It should be noted that higher energy self-consumption means a faster return on investment compared to a higher export rate to the grid.

Mitsubishi Electric have developed their own in-house monitoring, so I'm eager to hear to how well their system performed in a year's time.

You'll find below a link that will take you to a cool time-lapse YouTube video that shows you among other things, some interesting facts. A quick sampler of their facts is that they used 268 meters of mounting rail and laying the solar cable took one and half days!

Have a look here: https://www.youtube.com/watch?v=7zoJO5AXUlw 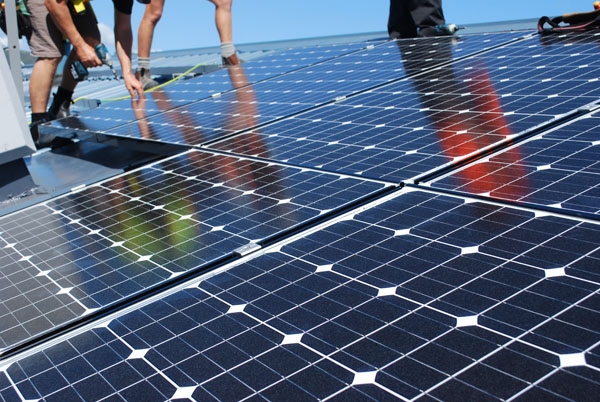 If you are considering taking your business to the next level, request a quote for solar power.