Home > My Solar Quotes Blog > Solar Power From The Moon

Solar Power From The Moon

A science fiction story by Isaac Asimov called "Reason" surfaced in 1941. It featured a space station that collected energy from the Sun and transmitted it to Earth using microwave beams. Modern technology, it seems, has really come of age - what was once considered science fiction is now a concept being tested for development by a Japanese company called Shimizu Corporation.

Except that it's not just a space station - it's the moon!

Yes, we're talking about a lunar-solar power-generation concept called Luna Ring that is poised to begin development in 2035. The dream, according to the company website is "a shift from (the) economical use of limited resources to the unlimited use of clean energy".

It shouldn't come as a surprise that the company behind this concept is Japanese. After the massive nuclear energy failure with the Fukushima meltdown, the entire country has immediately turned to solar energy - Japan is already one of the 5 countries to reach the 10-gigawatt milestone for cumulative photovoltaic (PV) capacity, right behind Germany, Italy and China. So there is little doubt that, at the very least, Luna Ring is a befitting endeavor for a Japanese company to undertake. But will it pay off? And more importantly, will it even work?

They say if it's too good to be true, it probably is. What Shimizu Corporation expects from Luna Ring is a steady stream of 13,000 terawatts of power. To put things into perspective, New Zealand generated only 42.9 terawatts of power in 2012 (all sources combined).

The reasons why Luna Ring can promise to generate with such superabundance are multi-fold. First, we must consider that Shimizu is planning to put a 400-meter wide ring of solar panels around the 11,000 km (6,800 miles) circumference of the moon (installed by an army of robots, no less). Second, we must take note that our beloved moon lacks an atmosphere. That means, save for the occasional eclipse, the photovoltaic cells on the equatorial Luna Ring will be constantly bombarded with solar radiation, unlike the solar panels we install here on Earth, which are subject to a diffusing atmosphere (clouds) and downtime at night.

Yes, Shimizu is certainly shooting for the moon here. But what about transmitting all that energy back to Earth? Microwave power transmission was first demonstrated in 1964, so we don't have any doubts about Shimizu making full use of that technology, with microwave antennas 20 km in diameter as they propose, but they also plan to use laser power beams to transmit power generated by the Luna Ring. To date, laser power beams only work in theory, as practical demonstration is too costly today. Perhaps that is why Shimizu is giving itself a 20-years' head start so that these technologies mature over time and become less expensive too. 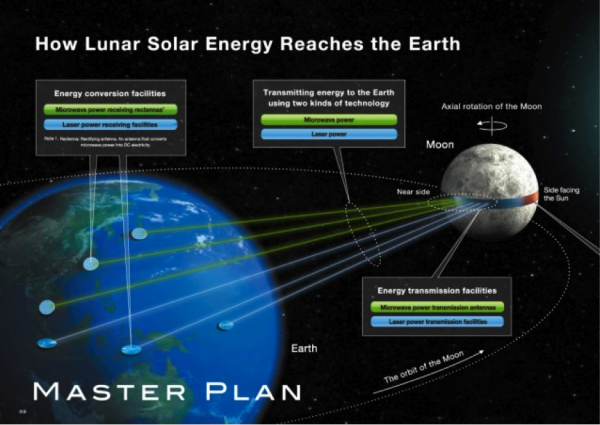 Lunar soil can be used to make ceramics, glass, Oxygen, concrete, solar cells and water, and Shimizu plans to make full use of these lunar materials for the construction of the Luna Ring. It may still be a far-fetched concept, but the company behind it has shown that it is possible in theory, at least. One can imagine how various countries might, one by one, line up to support this project as it initiates - they can all benefit from an electricity receiving station close to home, especially if it is virtually unlimited. Cost should cease to be an issue at that point in the eventual phase.

Clearly, this is one of those projects that has the potential to take our civilization from Type 0 to Type 1 on the Kardashev scale in terms of technological development (by harnessing global energy supplies), but will it ever materialize? Only time will tell.