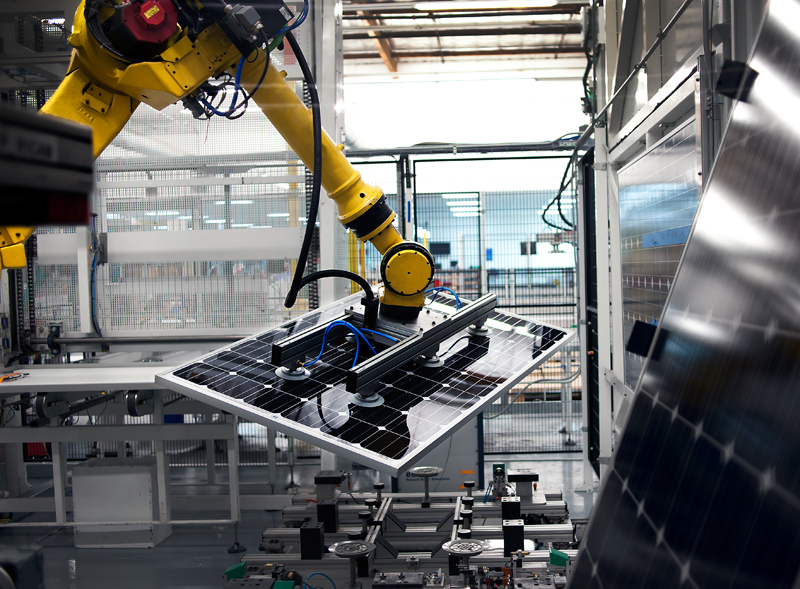 Working silently to convert sunlight into useable power, photovoltaic technology is truly a fantastic miracle of science. Unfortunately, sunlight shines from the sky, while PV modules and their associated components do not-each consuming energy and resources along every step of the production process, from material harvesting to manufacturing to assembly and shipping.

Therefore it's no surprise that frequently renewable energy skeptics question how much energy it takes to produce and ship a solar panel compared to how much energy the solar panel can produce.  If, for example, it took more energy to manufacture the panel than the panel would ever produce in its lifetime, it would not be reducing the carbon footprint it was designed to offset.

Luckily, this is not the case. Studies show that it takes less than three years for one solar panel to offset its "embodied energy," or energy spent manufacturing and shipping it. After roughly three years, all the energy that the panel produces is completely clean and does not need to be accounted for in any manufacturing processes or raw materials used to make the panel.

One study concludes, "Unlike conventional energy sources, PV systems produce clean electricity for decades after achieving their energy payback in three or fewer years-this is truly the magic of PV technology." Energy payback, or EPBT, is calculated by dividing the energy needed to produce a PV system ("specific energy") by the system's energy generation rate. Please note that "specific energy" accounts not only for the direct energy required to produce PV systems, but also the embodied energy of the raw materials used in manufacturing all the parts of the PV system.

Studies of energy payback time (EPBT) estimate that it takes a PV system one to three years to produce the same amount of energy that it took to manufacture it, a far cry from the 20 years estimated in 1975. Given that a PV system will continue to produce electricity for 30 years or more, a PV system's lifetime production will far exceed the energy it took to produce it.

However, EPBT calculations are heavily influenced by how much sunlight a PV system will receive. The more sunlight received, the more kWh the PV system will produce-and the faster the PV system will offset the energy it took to manufacture it. If you live in a sunnier climate, then the energy payback time will be less. For example, a system installed in Grand Junction, Colorado, which averages 5.8 peak sun-hours daily, can cut its EPBT by more than 23% under a continually sunny southern European site. The opposite is true as well. If you live in a cloudier climate, the PV system's EPBT will be longer. The current overall worldwide average EPBT of one to three years accounts for cloudier locations across the globe.

Even though you may have to wait two to three years for energy payback, unlike conventional energy sources, PV systems produce clean electricity for decades after achieving their energy payback, Electricity derived from coal and natural gas will never be able to outweigh the energy and continual resources required to produce it.

Finally, it's nice to know further advances will be made. PV manufacturers are always seeking to reduce manufacturing costs, through reducing the amount of silicon required, improving PV cell efficiency, experimenting with new materials, and by testing new production methods. Most cost-reduction strategies will also reduce energy payback time. I'm confident that in the future we will find ways of using less energy to produce PV modules, and we will achieve energy payback even sooner. So, to the skeptics out there: Solar is sweeping the planet, and rightfully so!