By Kristy Hoare on 13th October 2014 in New Solar Technology 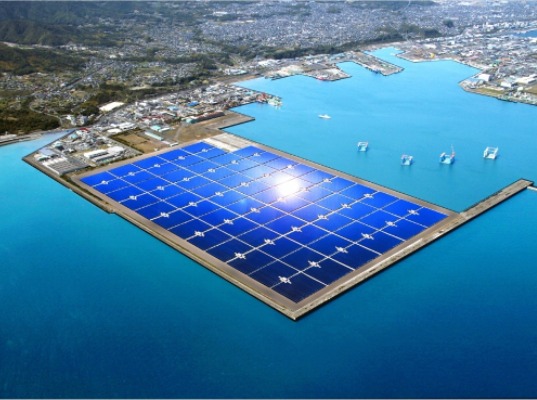 Japan may be lacking free land space, but that's not stopping them from investing in renewable energy. In fact, Japanese solar technology giant Kyocera recently began construction on two floating solar power plants, which will become part of a huge, 60 megawatt floating renewable energy network that should be up and running by April next year.

These are just the first two of a planned network of around 30 floating 2 megawatt (MW) power plants, capable of generating a combined 60 MW of power, turning the project into a record breaker. And, the floating power plants aren't just good for saving space, Kyocera said that in addition to easing land pressure, the floating solar arrays promise to deliver higher levels of conversion efficiency than standard solar farms, thanks to the cooling effect of the water. And that's pretty neat.

The project represents a further boost to the Japanese solar industry, which has enjoyed a surge in new developments in recent years thanks to the government's feed-in tariff incentives and significant investment from Japanese solar manufacturers. (Hint, Hint, New Zealand)

It seems to me, with close to 70% of the world's surface being water, leaving around 30% of land for nearly 7 billion people to live on, setting up solar farms on water is starting to look like a very viable idea, especially for Japan, who can now go beyond their land surface, and expand to the seas.

But not only for Japan, think about what this could mean for other island countries like New Zealand, The United Kingdom, Iceland, The Philippines, Malta, and so many others who must prioritize saving land space. I think the Japanese are really on to something big, and that a future powered by renewable energy is looking bright!