By Kristy Hoare on 25th March 2014 in Renewable Energy 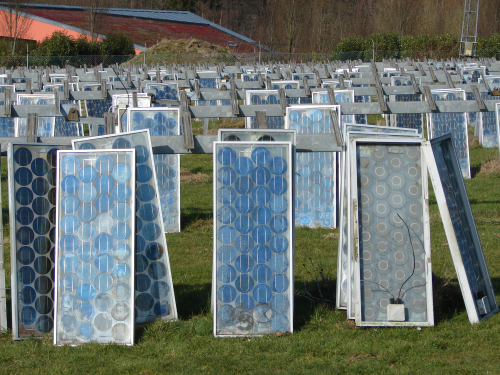 The old energy economy, with its social and environmental impacts, has given way to a new, clean energy economy that predominantly features solar energy today. But solar modules contain some potentially dangerous materials, namely, silicon tetrachloride, cadmium, selenium, and sulfur hexafluoride. As the first range of solar panels installed in the 1990s reaches the end of their lifecycle, it is time we talk about how we recycle them.

One of the defining characteristics of New Zealanders is that we are inextricably bonded to our land. We love the natural world, resist destructive mining activities, and when we think about going green with solar energy, one of their primary concerns are about whether the solar panels installed can be recycled or not. Talk about going double green!

At this point in time, recycling of photovoltaic (PV) panels is still not viable economically. While some companies are already recycling thin-film and silicon solar modules, the issue with PV recycling is that the raw materials are cheaper than the cost of recycling - but this could change if energy is priced correctly, including carbon pricing and carbon tax, and appropriate subsidies and tax cuts are applied by the government. As the volume of panels at the end of their lifecycle increases, solar companies will find that their "producer responsibility" for recycling panels has turned from an expense or branding exercise into a source of profit, as they can count on economies of scale that way. In 2014, despite a 370% increase in solar installations in New Zealand for the past two years, solar energy still isn't mainstream, but this is sure to change in the near future.

The life of a PV panel is 25 years plus. Before it can be recycled, it must be taken down and collected. The way it is collected plays a significant role in the overall cost of recycling, and from there on it is all about how it is broken down into its individual components. The plastic components are removed first using a thermal process where rack-mount modules are incinerated and burnt in a semiconductor-protecting process at 600°C before a silicon wafer can be recovered through etching. Glass and metals are separated manually and sent for recycling.

Silicon is the most valuable component in most solar panels manufactured today as it plays the role of a semiconductor facilitating absorption and conversion of sunlight into electricity. Old solar panels undergo a wet-chemical treatment process to rid the silicon wafers of dust and soiling agents. Companies generally try to retain most of the original wafer thickness and claim that recycled wafers are as good as new ones. Sometimes the cells have edge chippings, micro cracks etc. - they can't be recycled as intact wafers - so they are used to obtain silicon raw material instead.

Thin-film solar panels are already being recycled, mostly because the elements used in them are not found in abundance in the earth's crust, but also because some of the materials used are extremely harmful for our ecology. After collection at the end of their lifecycle, thin film panels are shredded into large pieces before being hammered down to break lamination bonds. Semiconductor films are separated through a slow rating leach drum and etched from the glass during this cycle. Glass is separated from the liquid in a classifier and cleaned before the rinse waters are pumped to a precipitation system for recovery of metals in three different stages.

Manufacturers may produce thin-cell or PV solar modules, but for a truly clean and green solar industry, they need to sit down and have consensus over the need for recycling and to implement recycling strategies right from the design phase and onwards. Silicon Valley Toxics Coalition (SVTC) is one organization that is making remarkable efforts to show solar manufacturers the light in this regard (pun intended, of course). SolarWorld and REC are currently the only manufacturers that do extensive chemical emissions disclosure and reporting, according to SVTC in their 2013 Solar Scorecard.

The PV industry has successfully developed lead-free soldering used in various parts of a typical solar panel, and SVTC has also identified new materials that can help the PV industry be greener, such as dye-sensitised, organic and hybrid cells. As such, the entire solar energy industry seems to be on the same page when it comes to curbing environmental damage. More and more, recycling is not a question of 'if' but 'when'.

Whether you're a commercial, government or residential solar energy user, you're making a long-term financial and environmental commitment, so it is only fair if solar energy panel manufacturers maintain their green credibility by providing cradle-to-cradle recycling for the solar panels they produce. It may be just a branding expense for now, but as solar energy becomes more popular, recycling is sure to become profitable and that will level the playing field for all manufacturers eventually. The smart ones have already begun recycling to stay ahead of the game and consumers are watching them closely as they equip their houses with solar energy systems.