Home > My Solar Quotes Blog > How Many Solar Panels Will Be Needed To Power New Zealand?

How Many Solar Panels Will Be Needed To Power New Zealand? A couple of years ago, iconic clean-tech businessman Elon Musk made a curious tweet - “That free fusion reactor in the sky conveniently converts ~4 million tons of mass into energy every second. We just need to catch an extremely tiny amount of it to power all of civilization.” He was right.

A year later, he expanded on that by saying that all of civilisation can be powered with a very small percentage of Earth’s area having solar panels. Of course, he was right again. Some people even worked out the numbers. The World Economic Forum also did some calculations and claimed that only half of the world’s roofs covered with solar could meet its entire electricity demand.

The feasibility of a single humongous solar plant powering the whole world is a different topic of discussion. But we think that this is an excellent thought experiment that highlights the awe-inspiring capability of solar power to electrify large areas. And we thought, why not find out how many panels we would need to power entire New Zealand? So here we go!

To figure out the number of solar panels needed, we need to first look at how much electricity the country uses - just as we do for a single house.

On average, kiwis use about 40 TWh of electricity in an entire year. That’s a considerable 40 billion kilowatt-hours. For perspective, a single kWh can run your laptop for 10-20 hours.

40 billion kWh is a staggering amount of energy, and the amount of solar required to generate it will naturally be huge too! Let’s find out the exact number. The amount of energy each solar panel generates throughout a year or a day depends on several factors, most important of which is the availability and intensity of sunlight.

For simplicity, let us consider that all other factors are ideal (clean panels, facing North, low transmission losses, etc.). We can find the kW of panels required using the following formula:

The kWh required per day can be calculated from the annual kWh (40 TWh).

Now, the peak sunshine hours are the number of hours each day when the panels receive full sunshine. This varies with the location, but let us assume that we’ll be setting up our imaginary gigantic solar plant somewhere around Auckland. I know, I know, let’s also imagine that we have enough space there.

Auckland receives, on average, about 5.5 hours of full sunshine. So now we have,

This is about 20 GW of solar power generating capacity. Consider a little margin (20%) for efficiency and you have around 20 GW x 1.2 = 24 GW.  That's 24 GW of solar capacity required to power all of New Zealand.

24 GW is outrageously huge for any solar farm. Even the world’s largest solar plant - the Bhadla solar farm in India, is a 2.25 GW facility, sprawling over 14,000 acres. That is still a mere tenth of the 24 GW plant we are imagining in our heads.

Back to calculating the number of solar panels required. Solar panels have become far more efficient and powerful in recent times. While 250-300 W was common in the last decade, 400 W is a pretty common size nowadays. Considering all the panels to be 400 W, we have -

Here comes the interesting part. As Musk says, can we really generate energy for unusually large areas using just a small percentage of the land area? Let’s find out the same for New Zealand.

Typically, a kW of solar installation requires about 8 m2 of space. Therefore,

Here’s an approximation of how much size the plant would need if installed near Auckland: 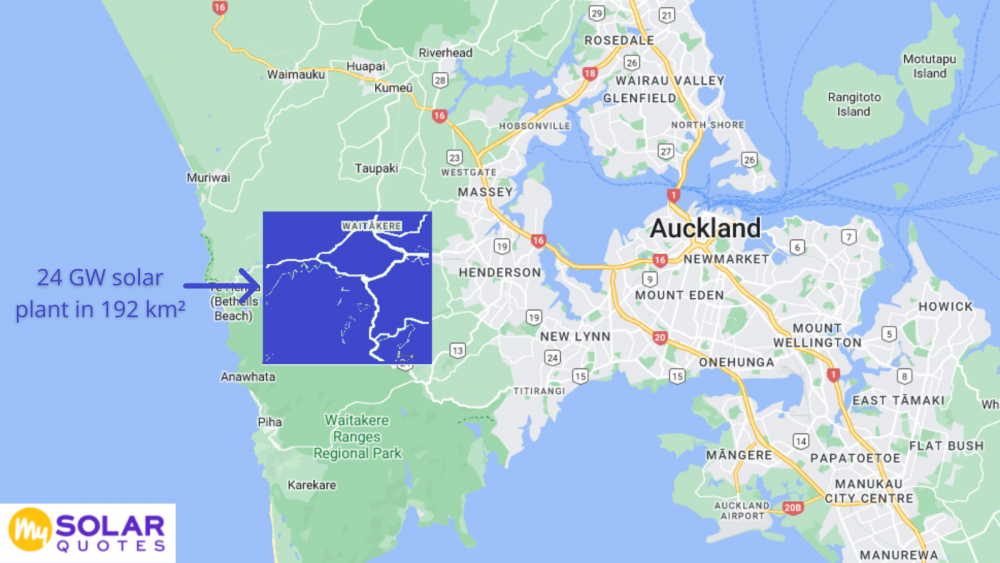 Of course, installing solar panels in a single 24 GW, 192 km2 would be a ridiculous idea - it would need clearing off large sizes of forests and even suburbs. It would be more sensible to install 50 different plants all over the country generating half a gigawatt each. This would save unnecessary transmission costs and losses without costing much more.

That is the beauty of solar power. Two nuclear plants will cost a lot more than a single plant with double capacity, but with solar, the increase in cost when you split plants is gradual. An even more sensible idea would be to install solar on as many roofs as possible. This would also bring energy independence and resilience to individual homeowners.

However unrealistic 24 GW might sound, the good news is that we won’t need all those gigawatts from solar. Fortunately, an incredible 80% of the country’s electricity comes from renewable sources. This includes geothermal, hydro and wind power. For the remaining 20%, if we consider 20% of 24 GW, it comes out to a relatively easy 480 MW.

There are almost 2 million dwellings in the country. Considering the average solar system size of 5 kW, a mere 96,000 houses would be required to generate the entire 480 MW. That is less than 5% of the total houses in the country.

You know what this means - running the entire country on renewables, if not on solar, is not only technically possible, but also practically achievable in reality (not to mention how awesome it is!).