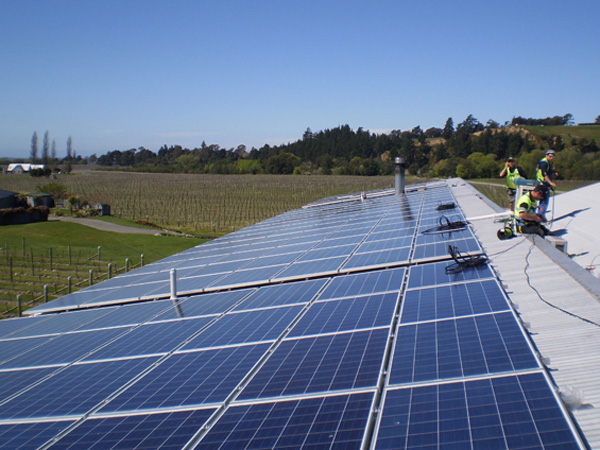 Marlborough company Spy Valley Wines has installed a 52kW solar power system and they claim to be producing more wine from solar power than any other company in New Zealand.

The solar panels that were installed in August 2013 have reduced their power demands by 15%.

After the company researched the components and worked out their return on investment from the solar power system, they were ready to go ahead.

Not only are there huge financial benefits of installing solar power for the company, but it also ticks the box for becoming more environmentally friendly.  Valley wines recognize "Our environment is the most important thing we have. Without it there is no Spy Valley Wines".  The business is apart of the Sustainable Winegrowing programme that focuses on improving company's environment, social, and economic sustainability.

Marlborough is without a doubt one of the sunniest spots in the country receiving 2,409 sunshine hours a year, a great place to be generating solar power.

211 solar panels are fitted on the wineries roof making them the largest solar power producer in the New Zealand winery industry.  Their power demand for the year, ending on the 30th June 2013, was 610,000 kWh. The payback period has worked out to be 8 years, but should be less as the price of electricity increases each year.

Results from the system so far show the system is performing above the initial estimate.

The solar power industry hopes solar panel installations like this will start a trend among other wineries.