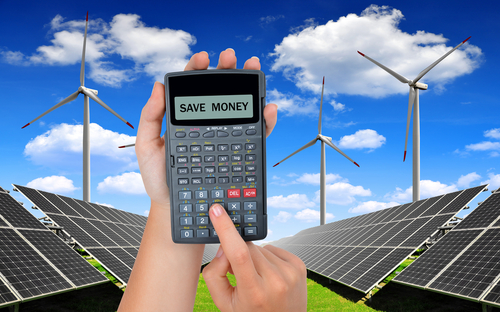 Savvy solar enthusiasts and vaguely interested punters alike may have noticed an influx of solar calculators popping up on websites throughout New Zealand recently.   Eager to find out more, I did a little research and came back with some surprising results. Some solar calculator websites offer the public genuine help, while others, not so much.   In this article, I explore various solar calculators and attempt to find out how accurate they are, if accurate at all.

Let's begin; 6,548kWh is the average calculation of my electricity usage per year, taking this data I can compare calculators, and arrive at fair and reasonable conclusions. Some calculators requested the size of system I was interested in, the answer always being a 2kW solar power system.   That would cost me somewhere in the ballpark of $7,000, fully installed.   I get charged $0.32 for each unit of energy I use, hence entering this number in every calculator. 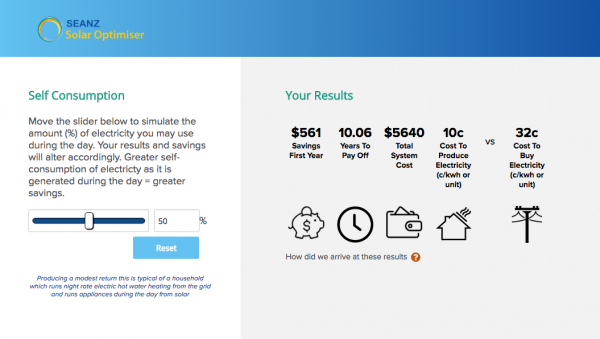 The results page was excellent too, it wasn't set in stone which allowed for ease of navigation at the self-consumption bar.  I was alerted to the fact that if I used more solar power directly rather than exporting the power my savings and ROI would fare much better.   This feature showed how if I slightly altered my energy usage habits, I would save even more.

The calculator selected the best size for me, as opposed to guessing.   I selected a   2kW system, working in the industry I was aware that it was the best system size for me anyway, but great for people who don't know.

Another neat part of the page is that the calculation assumptions are explicit on the results page. Excellent stuff. 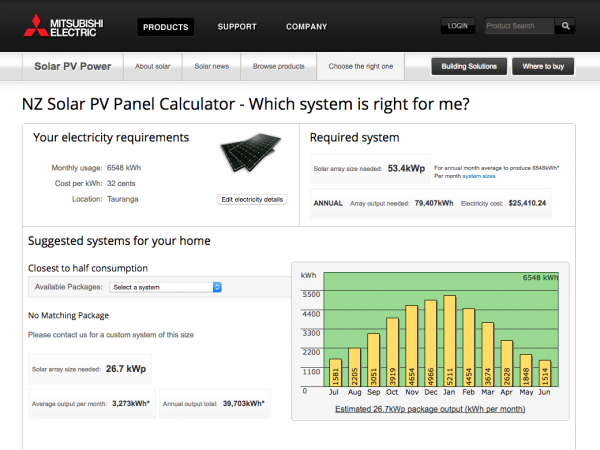 Recommending a system size is the main purpose of this calculator, but you wouldn't have thought so.

This calculator gives you an accurate sized solar power system, matching your energy usage to solar power production.   However, if you want a standard grid connect system, it's not that helpful. It doesn't calculate how much solar power you can use directly, or how much will be sent to the grid where you are paid a very small amount for electricity.

This calculator won't give you an optimal size for optimal return on investment.

If you plan to add battery storage to your solar power system at some stage, the recommended system size would be useful - but these facts are nowhere to be found. Shame really. 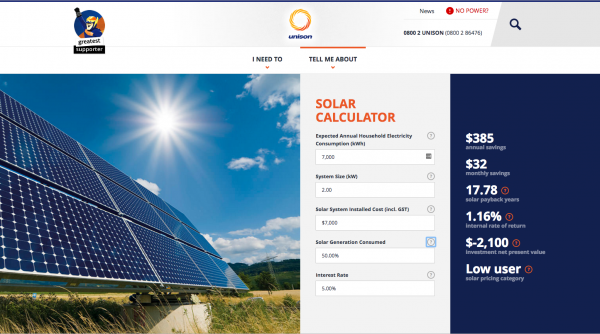 Unisons calculator has no input field for my electricity price.   That is the first thing I noticed on the calculator and it bugged me. Unisons are a lines company, so they can't dictate the final cost per kWh as this depends on what retail company I choose.

Unison didn't ask for my present location in New Zealand, which I found to be rather strange as this obviously effects the amount of solar I can produce.   It's likely that they generalized and assumed my roof was north facing and at a perfect 25-degree angle, but in the end, they made no reference to roof angles, or my roof, or anyone's roof, at all.

The good part?   I got to comment on what I think, or guess, my solar generation consumption would be.   Conservatively, I guessed 50%, so I went ahead and entered that into their system.   But, my total annual savings on the Unisons calculator were significantly lower than my own calculations.   They calculated $400 annual savings, compared to my $566. Matching their calculations would have seen my price for power as low as $0.20/kWh, way off what I actually pay ($0.32/kWh).

What's not clear is if this calculator includes a solar tax, a little tidbit that Unison are known for.   Unison recently introduced a new price scheme for people with solar power, seeing them pay a higher variable rate, which likely occurs at peak hours e.g. between 5pm and 9pm.

Unison assume It would take a whopping 17 years to reach the point of payback on my investment.  However, my own conservative calculations come through at 12.5 years.     Unison, the company that brought you the 'solar tax'. To be brutally honest the only calculating they are doing is trying to put people off solar. 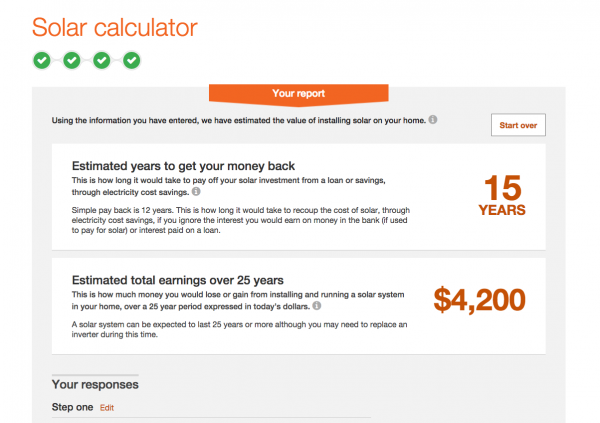 Entering identical details into all the calculators, I have to admit the results at the end were a bit shocking. "15 years" in a big bold font greeted me, what did this mean? Was this the estimated years to get my money back from my original investment? That seemed wrong, so I read on. In a smaller and lighter font, the next text stated "simple pay back is 12 years", what did this even mean? Talk about word play.   Apparently, it's the payback period if I chose to ignore the interest I would earn on money in the bank.

I may earn an annual return of $566 on my 2kW system, but it is actually less because I'm no longer earning interest on my $7K in the bank? I am not entirely sure how they worked this out, or why it's factored in.

Then, my next big result. $4,200 €¦. the estimated total earnings over 25 years.   My personal total earning calculation was $7358.   Which assumed payback after 12 years, and then 13 years of 'making money' (13 x $566).   They do mention 'you may need to replace an inverter during this time' - perhaps my earnings would be less if they assumed I wanted a really, really expensive inverter.

One positive attribute of this calculator is its ease of use.   The negatives are that it is built with simple calculations, and with assumptions that just aren't shared.

Zero questions on if I will be using battery storage, or if there might be ways to increase self-consumption e.g. putting your dishwashing on a timer etc.

Nor does it take into account the line charges on the power bill which are separate to the actual usage amount..