Home > My Solar Quotes Blog > What is the difference between monocrystalline, polycrystalline and thin-film solar panels?

What is the difference between monocrystalline, polycrystalline and thin-film solar panels?

By Kristy Hoare on 15th November 2018 in Solar Technology 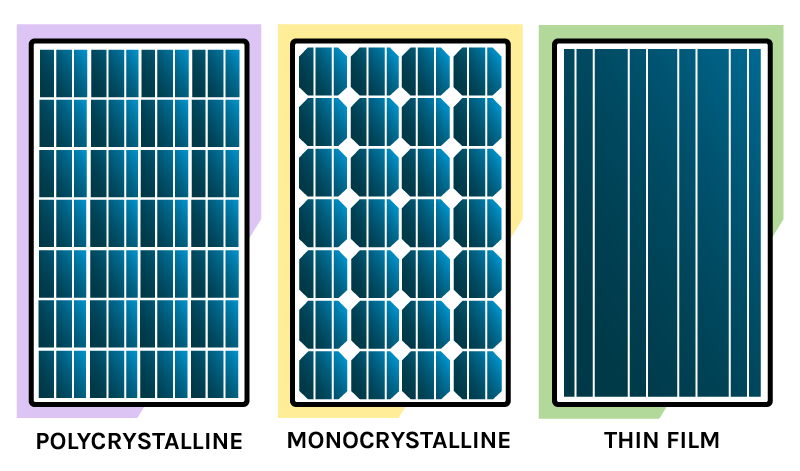 The difference lies in the purity of the Crystallized Silicon (c-Si) used - the more perfectly aligned the silicon molecules, the better the solar cell will be at converting solar energy into electricity. Below is a description of each solar panel type.

Monocrystalline silicon cells are made using a layer of single silicon crystals at about 60 cells per panel. The four sides of the single crystalline solar cell are cut out to make silicon wafers that not only optimize performance but also lower costs. They are easily distinguishable for this reason, because the corners of the wafers look clipped, like an octagon (see image).

These solar panels are expensive to make and expensive to buy, but they yield the highest power output compared to other solar technologies. They are also space-efficient as they take up less space on your roof to produce the same amount of power as a polycrystalline or a thin-film solar panel.

Polycrystalline or  solar cells are composed of thin layers of many small silicon crystals. Although they may use a lower grade of silicon, they are not considered to be inferior (not any more), thanks to advances in panel technology. When space is not an issue, polycrystalline panels may be more cost-efficient to produce the same amount of electricity as a monocrystalline solar system.

Here's a fact that will help illustrate the difference between mono and polycrystalline panels, in terms of the solar modules efficiency: REC, a well-known solar panel manufacturing brand, report that while a panel is 16.7% efficient, their monocrystalline panel is 18.6% efficient.  This is only a small difference, but worth weighing up when comparing the price of each panel type.

Ultimately, the type of solar panel you choose for your home largely depends on your cost-benefit analysis. It is nearly impossible to recommend one or the other without studying your situation and the choices you have, thoroughly. You might be working on a shoe-string budget or have roof-space constraints that need consideration. Unless you want to incur the lowest costs possible (and space is not an issue), in which case thin-film solar panels may be the way to go, the decision is usually between monocrystalline and polycrystalline solar panels.